Rob and Mark, of Expedition Kayaks, organised a Greenland day at Yarra Bay, down by La Perouse, yesterday. They put on a free event featuring Mel and Wayne Hanley, from Greenland Down Under, for novices and more experienced sticksters.

This isn’t much of a video, but  there’s a bit of footage of me in it, on the other end of the camera for something different. It's vanity publishing after all. Some nice work from Dave Fisher as well.

Mel gave an inspiring demo of a dozen different rolls including norsaq and hand rolls, and we split into two groups: one working on basics, the other doing forward finishing. Rainy rainy day, lots of immersion in the dubious bacterial stew of Yarra Bay ( so far, 24 hours later, no bugs and just a stiff back).

I worked on my storm roll, which is on the very ordinary side of ordinary, and Mark showed me how to do a rodeo roll: essentially a reverse sweep roll but beginning on the off side. Had a hoot learning that one. Like all the reverse rolls it does your head in to start but once your body understands what the transformation is it comes together well. Looking forward to a lot more of those rolls.

A good day, learned much new stuff, and looking forward to Cheri Perry and Turner in April. 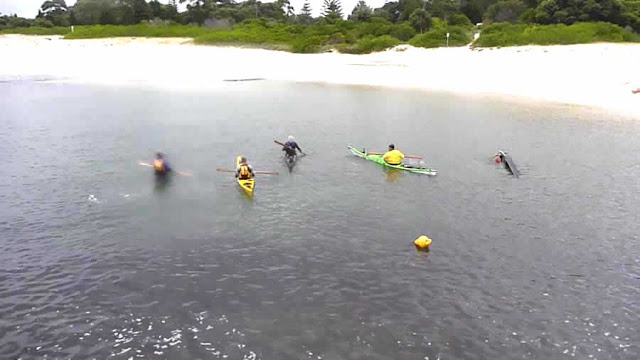 Ian Vaile
25 years in a kayak, many more on skis. Based in Sydney in Australia, I live on the harbour and have the wilderness of the sea at my doorstep.